Sometimes I just need to get out of Denver. It’s a great city with tons to do, but I’ve got that itch that can’t be scratched by anything but a trip, you know what I mean? That’s why I love taking a weekend away to explore a new place. This particular itch required a beach, so I began looking up coastal half marathons. What better way to get a view of the ocean than running next to it for 13.1 miles? The Big Sur Half marathon has rave reviews (and it’s own Yelp page!) and takes place in one of the most beautiful places in the country. With mild weather, stunning views of the Pacific, and the cool-beachy-relaxing vibe that Monterey has going on, the whole experience makes a perfect weekend getaway to hit life’s refresh button.

I stayed in an amazing bed and breakfast located in Pacific Grove, the town on the northernmost tip of the Monterey Peninsula. The Gosby House Inn advertises itself as “A Romantic and Cozy Victorian Inn” and I would say that description is spot on. It was perfect for a relaxing weekend, and quiet and comfortable enough for me to get the sleep I needed before my race on Sunday. I stayed in Guestroom 2 in their main house, which was about as Victorian in style as I can imagine. The staff was friendly and so accommodating. I arrived very late after the desk had closed and they made sure I was able to access my room with ease. The breakfast was complimentary and delicious, and added a homey community feel to the stay since it was served in a dining room with lots of shared seating areas. The inn is also centrally located within Pacific Grove so there’s an unlimited amount of restaurants and shops right outside the front door. I highly recommend checking it out.

As Saturday was my only full free day with the race on Sunday, I wanted to experience as much of Monterey as I could. I woke up early and drove over to Cannery Row, the historic hub of Monterey. Cannery Row’s history is incredibly fascinating, tied up in the whaling and sardine industries. Stories of the area dating back to the 1800’s are reflected throughout the shops, restaurants, and docks with various little monuments and plaques around the walkways. I spent quite a bit of time exploring this area and looking out into the water. I cannot even describe my excitement when I realized there were sea otters in the bay! It was the first time I’d ever seen an otter out of captivity. They like the kelp forests that are plentiful in the bay so you can often see their furry heads poking up among the greenery. I didn’t get any clear photographs, but I promise there are otters out in that water!

The biggest attraction on Cannery Row, and one of the biggest in Monterey, is the Monterey Bay Aquarium. It’s considered to be one of the best aquariums in the world and is focused on conservation, something that is clear throughout the exhibits. I could easily spend hours watching the jellyfish tank or the activity of the kelp forest. I recommend stopping by the aquarium at an early point in your trip to get a sense of the history of the area and an immense respect for the environment around you.

After I spent a few hours in the aquarium, I tracked down the best clam chowder I’ve ever tried. I’m a huge fan of New England style clam chowder (none of that Manhattan tomato stuff for me). I’d heard a rumor that the best was served in a giant bread bowl just a couple of blocks from the aquarium. Vivolo’s Chowder House stands out with its bright blue awning against the white building. I ordered a glass of chardonnay while I waited, and shortly after was presented with the biggest bread bowl I’ve ever had. The chowder was creamy and balanced, highlighting the flavor of the clams but without an unpleasant fishy taste. The broth had the classic lusciousness of a Boston chowder but was not too heavy. There was also no unpleasant grittiness from the clams, something I always appreciate when it comes to shellfish. 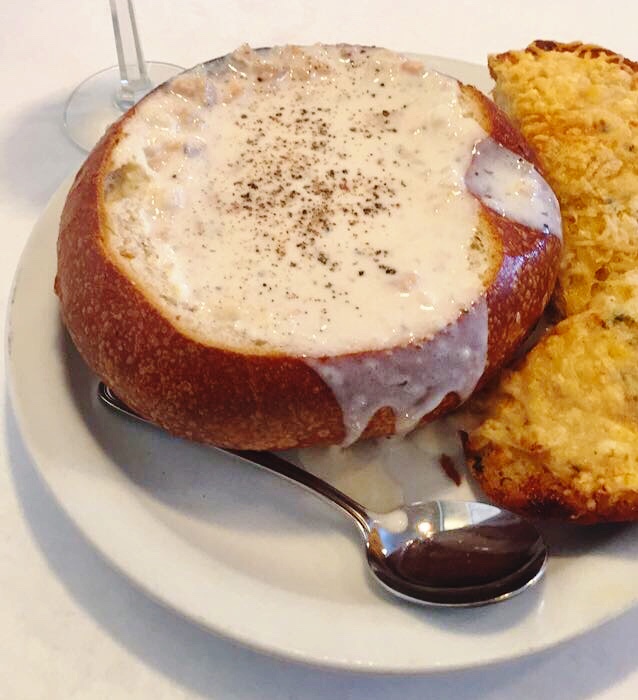 A trip to Monterey is not complete without a ride along the 17-Mile Drive, one of the most scenic coastal roads in the world. It passes through the whole peninsula, hugging the Pacific Ocean and giving a glimpse into the gated community of Pebble Beach. A small fee gets you through the gate and a map of points of interest along the route, all of which are marked and have a place to pull off the road.

If you can, time your drive around sunset. You won’t be disappointed!